This blog post discusses the parallel signal sending optimization that recently got merged into the master branch (scheduled to be included in Erlang/OTP 25). The optimization improves signal sending throughput when several processes send signals to a single process simultaneously on multicore machines. At the moment, the optimization is only active when one configures the receiving process with the {message_queue_data, off_heap} setting. The following figure gives an idea of what type of scalability improvement the optimization can give in extreme scenarios (number of Erlang processes sending signals on the x-axis and throughput on the y-axis): 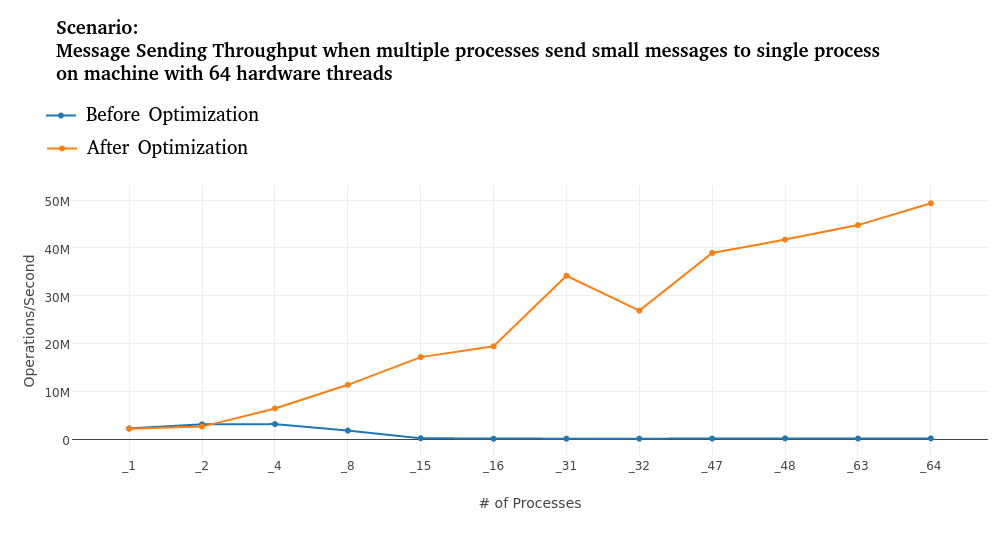 This blog post aims to give you an understanding of how signal sending on a single node is implemented in Erlang and how the new optimization can yield the impressive scalability improvement illustrated in the figure above. Let us begin with a brief introduction to what Erlang signals are.

All concurrently executing entities (processes, ports, etc.) in an Erlang system communicate using asynchronous signals. The most common signal is normal messages that are typically sent between processes with the bang (!) operator. As Erlang takes pride in being a concurrent programming language, it is, of course, essential that signals are sent efficiently between different entities. Let us now discuss what guarantees Erlang programmers get about signal sending ordering, as this will help when learning how the new optimization works.

The signal ordering guarantee is described in the Erlang documentation like this:

“The only signal ordering guarantee given is the following: if an entity sends multiple signals to the same destination entity, the order is preserved; that is, if A sends a signal S1 to B, and later sends signal S2 to B, S1 is guaranteed not to arrive after S2.”

This guarantee means that if multiple processes send signals to a single process, all signals from the same process are received in the send order in the receiving process. Still, there is no ordering guarantee for two signals coming from two distinct processes. One should not think about signal sending as instantaneous. There can be an arbitrary delay after a signal has been sent until it has reached its destination, but all signals from A to B travel on the same path and cannot pass each other.

The guarantee has deliberately been designed to allow for efficient implementations and allow for future optimizations. However, as we will see in the next section, before the optimization presented in this blog post, the implementation did not take advantage of the permissive ordering guarantee for signals sent between processes running on the same node.

Single-Node Process-to-Process Implementation before the Optimization #

Conceptually, the Erlang VM organized the data structure for an Erlang process as in the following figure before the optimization:

Of course, this is an extreme simplification of the Erlang process structure, but it is enough for our explanation. When a process has the {message_queue_data, off_heap} setting activated, the following algorithm is executed to send a signal:

When a receiving process has run out of signals in its InnerSignalQueue and/or wants to check if there are more signals in the outer queue, the following algorithm is executed:

However, even though {message_queue_data, off_heap} scales better than {message_queue_data, on_heap} with the old implementation, signal senders still had to acquire the OuterSignalQueueLock for a short time. This lock can become a scalability bottleneck and a contended hot-spot when there are enough parallel senders. This is why we saw very poor scalability and even a slowdown for the old implementation in the benchmark figure above. Now, we are ready to look at the new optimization.

The optimization takes advantage of Erlang’s permissive signal ordering guarantee discussed above. It is enough to keep the order of signals coming from the same entity to ensure that the signal ordering guarantee holds. So there is no need for different senders to synchronize with each other! In theory, signal sending could therefore be parallelized perfectly. In practice, however, there is only one thread of execution that handles incoming signals, so we also have to keep in mind that we don’t want to slow down the receiver and ideally make receiving signals faster. As signal queue data is stored outside the process main heap area when the {message_queue_data, off_heap} setting is enabled, the garbage collector does not need to go through the whole signal queue, giving better performance for processes with a lot of signals in their signal queue. Therefore, it is also important for the optimization not to add unnecessary overhead when the OuterSignalQueueLock is uncontended, so that we do not slow down existing use cases for {message_queue_data, off_heap} too much.

The following figure shows a conceptual view of the process structure when the parallel signal sending optimization is turned on. The only difference between this and the previous figure is that the OuterSignalQueueBufferArray field now points to a structure containing an array with buffers.

Currently, the number of slots in the OuterSignalQueueBufferArray is fixed to 64. Sixty-four slots should go a long way to reduce signal queue contention in most practical application that exists today. Few servers have more than 100 cores, and typical applications spend a lot of time doing other things than sending signals. Using 64 slots also allows us to implement a very efficient atomically updatable bitset containing information about which slots are currently non-empty (the NonEmptySlots field in the figure above). This bitset makes flushing the buffer array into the OuterSignalQueue more efficient since only the non-empty slots in the buffer array need to be visited and updated to perform the flush.

Sending Signals with the Optimization Activated #

Pseudo-code for the algorithm that is executed when a process is sending a signal to another process that has the OuterSignalQueueBufferArray installed can be seen below:

The algorithm for fetching signals from the outer signal queue uses the NonEmptySlots field in the OuterSignalQueueBufferArray, so it only needs to check slots that are guaranteed to be non-empty. At a high level, the routine works according to the following pseudo-code:

For simplicity, many details have been left out from the pseudo-code snippets above. However, if you have understood them, you have an excellent understanding of how signal sending in Erlang works, how the new optimization is implemented, and how it automatically activates and deactivates itself. Let us now dive a little bit deeper into benchmark results for the new implementation.

A configurable benchmark to measure the performance of both signal sending processes and receiving processes has been created. The benchmark lets N Erlang processes send signals (of configurable types and sizes) to a single process during a period of T seconds. Both N and T are configurable variables. A signal with size S has a payload consisting of a list of length S with word-sized (64 bits) items. The send throughput is calculated by dividing the number of signals that are sent by T. The receive throughput is calculated by waiting until all sent signals have been received and then dividing the total number of signals sent by the time between when the first signal was sent and when the last signal was received. The benchmark machine has 32 cores and two hardware threads per core (giving 64 hardware threads). You can find a detailed benchmark description on the signal queue benchmark page.

First, let us look at the results for very small messages (a list containing a single integer) below. The graph for the receive throughput is the same as we saw at the beginning of this blog post. Not surprisingly, the scalability for sending messages is much better after the optimization. More surprising is that the performance of receiving messages is also substantially improved. For example, with 16 processes, the receive throughput is 520 times better with the optimization! The improved receive throughput can be explained by the fact that in this scenario, the receiver has to fetch messages from the outer signal queue much more seldom. Sending is much faster after the optimization, so the receiver will bring more messages from the outer signal queue to the inner every time it runs out of messages. The sender can thus process messages from the inner queue for a longer time before it needs to fetch messages from the outer queue again. We cannot expect any improvement for the receiver beyond a certain point as there is only a single hardware thread that can work on processing messages at the same time.

Below are the results for larger messages (a list containing 100 integers). We do not get as good improvement in this scenario with a larger message size. With larger messages, the benchmark spends more time doing other work than sending and receiving messages. Things like the speed of the memory system and memory allocation might become limiting factors. Still, we get decent improvement both in the send throughput and receive throughput, as seen below.

You can find results for even larger messages as well as for non-message signals on the benchmark page. Real Erlang applications do much more than message and signal sending, so this benchmark is, of course, not representative of what kind of improvements real applications will get. However, the benchmarks show that we have pushed the threshold for when parallel message sending to a single process becomes a problem. Perhaps the new optimization opens up new interesting ways of writing software that was impractical due to previous performance reasons.

As discussed previously, 64 slots in the signal queue buffer array is a good start but might not be enough when servers have thousands of cores. A possible way to make the implementation even more scalable would be to make the signal queue buffer array expandable. For example, one could have contention detecting locks for each slot in the array. If the contention is high in a particular slot, one could expand this slot by creating a link to a subarray with buffers where senders can use another hash function (similar to how the HAMT data structure works).